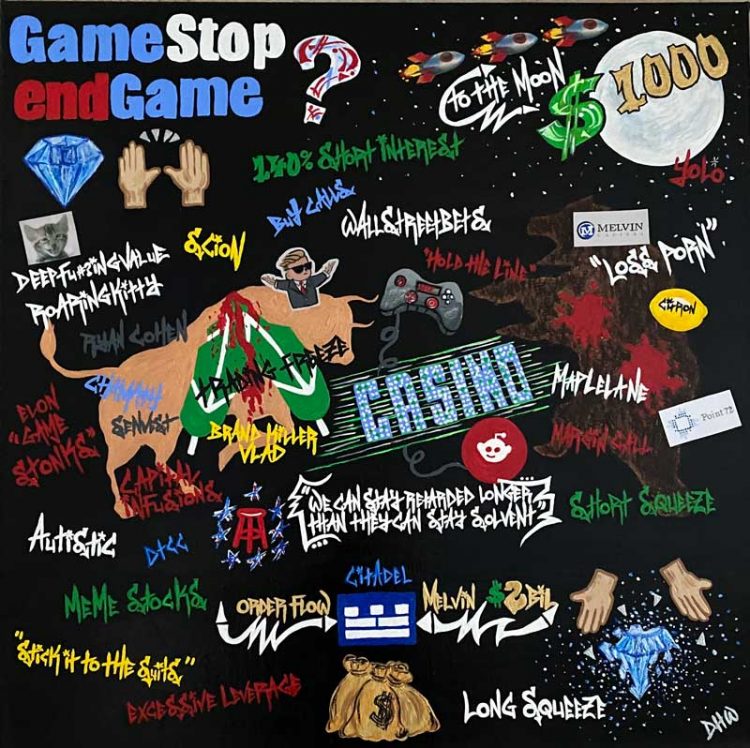 An inelegant short squeeze meets the canvas, and one’s home office may never be the same. Or that is what long-time hedge fund investment professional Donna Walker (aka Fearless D) has found as she took to her studio to document what she saw in the latest Wall Street scandal that was GameStop.

Walker, who took up painting a couple of years ago, has spent a good part of the pandemic channeling her creativity into numerous paintings, or what she calls on her pop-up website, “Wall Street Scoundrel art.”

In her latest installment, all the characters can be found from RobinHood, Citadel, Scion, Point72 Melvin Capital and those infamous Reddit personas. If it seems like a lot to take in at first glance at “GameStop EndGame” that is because connecting all the dots is not as easy as many the stories and opinions that have been posted across the Internet would make it seem. Hint: the story tends to unfold from the top right hand corner through the the lower left hand side.

Walker, who has done analysis on hedge fund managers (including notable short-sellers) for decades, initially began working with the Bass Brothers Enterprises in the early 1980s. Most recently, she has worked at a New York-based fund of funds. Throughout her career she has been a proponent of doing one’s research and due diligence.

She picked up painting taking online art classes, which even pre-pandemic were widely available. As her days commuting back and forth between Connecticut and Manhattan were long, painting became a great past-time that has recently began to take off in new ways for Walker.

Part graffiti, part graphic novella with a wee bit of a hedge fund investor angst thrown in, her work reflects a mindset that few outside the world of hedge funds would recognize. For those outside looking in, it all makes for an interesting education in how “The Street” remains distinct from Main Street in its own lexicon and versions of events.

Walker, like many in the hedge fund industry, disagree with the popular opinion that the GameStop short squeeze was the little guy taking on and beating the big boys at their own game. Indeed, in the weeks following all the mayhem many lost significant savings in the sell off that followed the RobinHood debacle.

RobinHood in a bid to temper the situation cut off the buying of shares in the struggling retailer GameStop. Many, including Walker, have questioned that approach. She recalled the suicide of a young man who in using RobinHood to trade options misunderstood a set of email communications from the trading app company and in thinking he owed hundreds of thousands of dollars tragically took his own life last year when in reality he did not owe any money. A wrongful death suit has since been reportedly filed by his family.

Past investment themes painted by Fearless D include: the Enron fraud, Tesla’s dissolution committee and a tribute to Elon Musk’s lies. She tends to also sell some of her work in the form of prints and jigsaw puzzles too. Her projects often include the Keynes quote, “The markets can stay irrational longer than you can stay solvent.” Let’s be honest though, these big market ideas can’t fit on a coffee cup.

Consistently the perspective is that of the short seller, which in recent years has been a bit of dying breed as many in the public square have pinned market disruption on their actions rather viewing them as unsung heroes in uncovering corporate fraud. Walker’s work always portrays the players of publicly traded companies from the short-seller’s perspective unapologetically.

While she has sold a good number of her works, she is also offering some of her large paintings for auction for an upcoming Dart for Art fundraiser for the LymeLight Foundation, which was co-founded by hedge fund manager Scott Bedford of Peninsula Capital Management.

What’s next? Only the short sellers know for sure, but what is certain though is that Walker’s take will be far from conventional. She is accepting commissions of favorite frauds and so it is not likely that she will run out of ‘scoundrel’ material anytime soon.

Walker said her hope is to expose current frauds by bringing those financial red flags to life in a way spread sheets and research reports can’t and as she pointed out, a picture is worth a thousand words.

Photos courtesy of the artist.